Eclecticism is a kind of mixed style in the fine arts: "the borrowing of a variety of styles from different sources and combining them" (Hume 1998). Significantly, Eclecticism hardly ever constituted a specific style in art: it is characterized by the fact that it was not a particular style. In general, the term describes the combination in a single work of a variety of influences—mainly of elements from different historical styles in architecture, painting, and the graphic and decorative arts. In music the term used may be either eclecticism or polystylism.

The term eclectic was first used by Johann Joachim Winckelmann to characterize the art of the Carracci, who incorporated in their paintings elements from the Renaissance and classical traditions. Indeed, Agostino, Annibale and Lodovico Carracci had tried to combine in their art Michelangelo's line, Titian's color, Correggio's chiaroscuro, and Raphael's symmetry and grace.
In the 18th century, Sir Joshua Reynolds, head of the Royal Academy of Arts in London, was one of the most influential advocates of eclecticism. In the sixth of his famous academical Discourses (1774), he wrote that the painter may use the work of the ancients as a "magazine of common property, always open to the public, whence every man has a right to take what materials he pleases" (Reynolds 1775, 26).

Western architecture
Early examples of eclectic architecture were built in the Kingdom of the Two Sicilies, particularly in the Palazzina Cinese in Palermo.


Eclecticism "was an important concept in Western architecture during the mid- and late 19th century, and it reappeared in a new guise in the latter part of the 20th century" (Muthesius n.d.).

(Credit for these notes go to Wikipedia)
I'd love to hear from anyone who's this way inclined -
a multidisciplinary, eclectic artist. It's exciting! 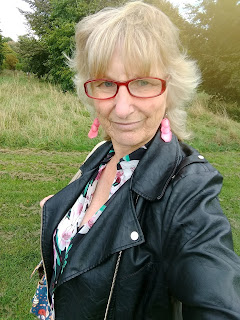 Jo B Creative
Hello, I'm a quirky creative, mental health advocate, traveller, wild west & ghost nut; a renaissance soul with a potty sense of humour. 6 years ago I began a miraculous journey to recovery from 30 yrs of depression. A brilliant mental health team treated me & today I'm better than I've ever been. So I'm rebuilding my creative & sometimes adventurous life & aspire to live a life less ordinary. I'm sharing my experiences to give sufferers of depression hope because depression is the most easily treated of mental health issues. I'm also sharing my eclectic creativity, which includes an epic western novel about a devastating cowgirl who's the fastest gun in the west. I try to accomplish some of this but it can be a little frustrating. My hero is Leornardo Da Vinci, who barely finished anything. If he can do it, so can I! No excuses. On I go, and I'd love you to visit and leave a comment. Speak soon!