HOW TO LOOK GOOD IN A GUNBELT!

How to Look Good in a Gunbelt!

I blame my daughter and Gok Wan (or is it Wan Gok?) for my comparatively new found interest in looking reasonable. Daughter was growing up and looking good and Gok Wan/Wan Gok was advising us gels how to look good naked.

In order to look reasonable as the wrinkles gained hold and everything body-wise was starting to head south, I had to discard the shapeless, baggy trousers, jumpers and coats that I had worn over the years, including a dusky pink jumper I'd worn to an office job years ago. The personnel officer had accused me, the twinkle in her eye twinkling hard, of wearing a gardening jumper. I remember the horrible thing well. Shapeless. Indeed, I had looked like a bag of garden waste. I chucked the shapeless item into the nearest bin and lost two and a bit stone over the next couple of years.

I'd been eating at least a whole bar of Galaxy at weekends and a bit extra on Wednesdays. A photo taken at a family wedding showed me looking pregnant. Good grief! Then Husband took a picture of me in western kit, consisting of mountain man shirt, fringed boots and stetson, and posing in front of my garden cabin, one foot planted nonchalantly on a barrel. It looked HORRIBLE. Fat! The sexy cowgirl of memory had gone to be replaced by something that resembled the barrel my foot rested on. 'Begone! Begone!' I hollered. I wanted to look good in a gun holster again. I planned to stick a photo of me in cowgirl gear, looking slim and beautiful, in the choc cupboard and go for it. Apparently I was classed as 'obese' by the National Health Service, which I still hotly deny. Plump, though, definitely. So, rather than react to the pic of me at a wedding, it was the one of me dressed in cowgirl kit that forced change.

We bought a rowing machine and I diligently used it almost daily, to-ing and fro-ing for fifteen minutes while watching various pop star videos. I found that two videos lasted the fifteen minutes as I to-od and fro-ed. I needed something with beat and rhythm, so I watched Queen, The Monkees, George Ezra, Paloma Faith, The Beach Boys, Pink Floyd... I could also have chosen heavy metal or rap, which would have been just as effective in the required beat department. I walked, too. Hard. Ran up and down the stairs for the hell of it.

I joined Weight Watchers for a while. It gave me the incentive to count the calories each day. If my points were under the limit, I could have a yogurt or something equally thrilling. But it worked. I'd watch the weight dropping. Instead of standing on the scales and listen to it screaming 'Get off!', I'd read the new weight. I lost around a pound a week. Over that period, two years ago, I lost two stone, but I've got more to go. From fourteen stone I dropped to twelve and a few more. When the dreaded needle in the scales window settled on 11st' (and thirteen pounds), I celebrated with a huge bar of choc (just kidding!).

I'm finding it harder now, though. I'm up and down weight-wise, generally settling on 12st two or thereabouts. We go out a lot and go away a lot. Which means eating a lot. We have a narrow boat moored in a marina in Warwickshire (this is relevant). The marina office sells Magnum Choc Ices. Raspberry flavoured. Husband has chocolate. Raspberry is sinful, according to him. Now they sell double raspberry. Are they trying to torture me, or what?

However, I have improved a la Gok/Wan, and daughter tells Husband that I have magnificent boobs! I wear colourful nail varnish, cut my own hair a bit spiky at times and spray colour onto strands – sometimes a lurid pink. So, on the whole, it works. I had, and still have desires, besides being a wild western woman in buckskin and sporting guns and knives, to be a hippy, a Goth, a steam punk gal or a rock chick, not necessarily in that order.

Now when I ride pillion on son's Harley, dressed in black leather jacket and boots, studded with metal, and roar off into the twilight, boy...does that feel good! Yo!
*Fist pump.*. 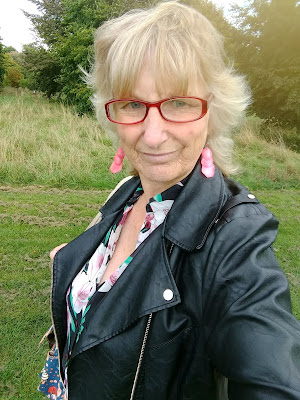