TALE OF A TOME - STORY OF A NOVEL

RAUNCH* ON A RANCH -
TALE OF A TOME 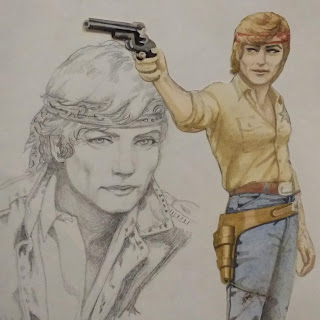 Everyone’s got a book in them. Apparently. Well, I’ve written mine. Nearly. ‘A beginning, a muddle and very definitely 'The End’ – as quoted by author and poet Philip Larkin, although he didn’t add ‘very definitely’. That’s mine.

In 1969 I teetered on the end of school. Man had landed on the moon and Butch Cassidy and the Sundance Kid were packing iron in the cinemas. My fascination for the moon landing was almost on par with that for the film, but that western played havoc with my flourishing imagination and has intruded on my night and daydreams ever since, revitalising my wild west passion and my previously non-vocalised feminist ravings about the wilder women of the west. Many years later, sporting gun and fringes, I emulated those women much to the embarrassment of my kids and the glee of the neighbours. During the sixties my hobby had yet to find its niche, and the influence of that film burrowed into my vulnerable, creative left pink blob of a brain, and there it remained.

I was a girl on the brink of womanhood with a multitude of wondrous thoughts and dreams, and the germ of a plot gradually emerged. Robert Redford was transformed into a devastating fair-haired woman who accomplished daring and devilish western actions and adopted masculine positions while retaining many womanly qualities such as some grace, smooth skin and features. A story developed in my head, leisurely and inexorably, during my days and nights. My brand new heroine became entangled in every traditional western action imaginable, revealing her lightning gun and efficient punch.

My excitement at having invented such an intriguing character was overwhelming. A female western protagonist who takes on any traditional hero and flips them over her shoulder with ease and embraces every western scenario with fire. I love it. The story I wanted to read. Back then I had yet to capture the whole saga on paper. My dreams involved disconnected portions of derring-do and devil-may-care, wherein my heroine thumped and was thumped back. Used her phenomenal draw. Was bullet-holed like a colander and resurrected every time. Rode like a madwoman. Became embroiled in womanly love and passion. I found it extraordinarily exciting. My heart thumped hard and I knew I had to write it.

To my utter discomfiture, however, an embarrassing (to me at any rate) facet emerged. It’s not for the eyes of those of a tender disposition. ‘Don’t worry what your mother thinks,’ they say. Too right. Sensitive raunchy bits which I wouldn’t read to my granny. Or yours. And my heroine is bisexual. At the time my embarrassment was monumental. 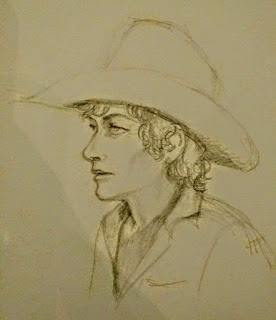 I tried to change it but my creative imagination refused to co-operate. My creativity was producing over-the-top-ness which I couldn’t prevent and the story was growing more electrifying by the second.

I thought and dreamt it continuously, drawing hundreds of illustrations of my heroine, by now the charismatic, beautiful, female version of Robert Redford. Self-consciousness ruled me. Husband knew I was creating all this in my head, was aware of my drawings. I didn’t want him to see them. What if he thought me strange if I went into torrid detail? But I couldn’t keep it from him. He was Husband. He had to know. I plucked up the courage to reveal The Plot and drawings. He inspected all while I hid beneath a pillow next door. He then pronounced to his cringing, blushing spouse that my heroine looked sexy and the story sounded intriguing. ‘For goodness’ sake,’ he said, ‘write the darn thing!’ I smothered him in relieved, grateful kisses and vowed to get on with The Story. Amazing what a few well chosen words can do.


The Writing of it

I penned some paragraphs. I changed some of it. I went to art college, had children and typed it with one hand on a manual typewriter, the other feeding a baby. I changed it. (The story – not the baby.) I retyped it on an electric typewriter. We acquired a word processor (all this happened in hotches and potches over the years) and I began revising it and realised how frighteningly humungous it was. The life story of my protagonist.

My younger child began secondary school. A real desire to see my originally day-dreamt story reach its finality in book form took hold and I got down to the nitty-gritty business of research – which happens as I write – and further revision. All during school hours. I now see the length of it. Monumental. In six parts, at least (far too many!). So is the task of plot-gathering, continuity, pace, grammar…

I’m lucky. I don’t have deadlines and a living to make. However, self-discipline rules. Back in those days, kids at school, down to work by nine o’clock. Lunchtime. Finish at three o’clock. I was good like that. Nowadays we’re retired (yes, alright, I’m still writing the darn thing but it is an epic) and I continue re-editing and research at night and during the day - on my laptop using memory sticks. How times change.

I couldn’t bring myself to show it to anyone. I knew I wasn’t alone in this, yet it had to be revealed to the population at large at some point, otherwise what is the point? I mean, when one sees what has been written before and sells, what has one to worry about? I'm no hard-nosed saleswoman. Therefore the tale had barely seen the light of day with the very odd exception of the occasional publisher I’d written to – I didn’t know them from Eve and they didn’t know me so it didn’t matter (one of them loved the idea, calling it ‘sensational’! Whoopee!) and one or two honoured pals who seemed to love the small portions I’d deemed to show them. But – as those in the know say – pals, parents and partners don’t (sadly) count.

Writing groups didn’t cater to my needs back then. After all, could you see it? Surrounded by open-jawed poetry and romance lovers while I recount a particularly raunchy section concerning hot hanky-panky. Only one thing for it, I muttered at the time – finish the ruddy thing and send three chapters and brief synopsis to an agent, even if it takes ‘till I’m fifty. (Only two years to go, back then.)

Added to this was my depression and anxiety. Being unable to come clean about the story played havoc with my already sensitive brainbox, and has caused me endless angst big time. One of the major causes of my depression. But, five years ago I began my full recovery from depression, and, over time since then, I decided to 'bite that bloody bullet' and get the bloody thing out, once and for all. So I'm working on it. And a major decision was made, put forward by Him Indoors, my flesh and blood hero. Finish the first three parts at a significant, natural pause in the story, and self-publish it. Times certainly do change.

Progress report: Hey – guess what? I’m sixty-five! Just. Once upon a time I joked that I would finish it before I was sixty. Hadeha. Never mind. I’m still enjoying it - between angsty moments. It still excites me, so that must be saying something. With the advent of e-mails I sent portions to various folk and received responses – critiques and great comments. Were they being polite? Don’t be polite – be honest! It’s an enormous relief to get it out there. And with the advent of e-publishing, I have no excuse not to do something with it.

I still suffer downs with the editing of it. Not the process itself, because that's coming on well, but associations with my past rear their ugliness and I feel low, possibly because of the sheer size of it, and only I can do it. But I can, and certainly am, 'doing it'.

I've written 'The End' many times. One day I will write 'The End' and mean it. Goodness me, what a thought!

I'd love to hear from other writers embroiled in epic works. Either here or on Facebook -  that would be fab! 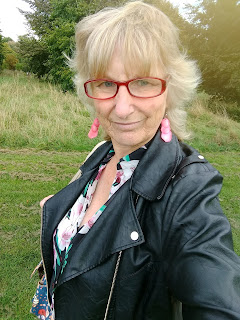