THE NOVEL - UPDATE. OUTLINE OF PART 1

If you've been following the story of The Novel (Alias Jeannie Delaney) and my progress on the editing process, I've been helped hugely by Husband, my chief critic and editorial bloke. Some say don't let family, friends or pets critique your creative work. Too much 'That's nice.' or 'Well done.' and not enough: 'Good. Could do with some tweeking of that sentence...' or 'How about a different way of putting this...?' etcetera. This is where Husband is an excellent critic - firm but fair - and it's in his best interests to keep me going 'cuz it prevents me from going nuts and who knows? One day I could make my fortune and my novel could be turned into a film starring... ooh....Sharon Stone? And he'd reap the benefits of my newly acquired riches. What's mine is his... etcetera...

A writing pal of ours suggested I stick with Husband as my chief critic and editor and not go here, there and everywhere for critiques, otherwise it could just get confusing and contradictory. Absolutely.

You might know that my intention - the conclusion reached between Husband, myself and loyal son a month or three ago - was to finish Part One, publish it on Amazon, then work on Part Two...and so forth. There are five or six parts. That's got to be cut down. Too many. So far, I've edited right up to the end of Part One, and each chapter that's finished I've printed out and Husband reads and critiques. I'm going back over chapters and continuing to edit because there is still so much to do. I'm working on getting the story and my protagonist Jeannie the way I've always imagined them. I think I'm getting there. It's bloody hard work but very pleasing when it seems to come together.

Jeannie (Morgan) is born in 1865 in New Orleans in the French Quarter. Her mother, Alice, is a southern belle through and through. Father, Dean, is a surgeon practicing in the city during the war. He's from a Virginian farming family and has a sister, Martha, who helps their widowed mother on the farm. Dean is a kind, liberal man and everyone adores him. He worships his wife and adores his daughter, who becomes his favourite offspring. Alice's father is a strict church minister. Jeannie has three older brothers. The younger one is born when Jeannie is two.

Jeannie develops into a beautiful tomboy and Alice struggles - and fails - to instill ladylike tendencies into her, and a deep disappointment in her only daughter grows within her. Rodger, the eldest son and mother's soul mate, strongly resents Jeannie for hurting their mother. Jeannie's favourite brother is Mike, two years older then her. She is a rebel, extremely strong minded, opinionated and independent. She succeeds in not being forced into a stay, or corset, and, home from school, insists on wearing trousers and cutting her hair short. As she matures, many of the surrounding boys turn to her as a fun-loving and funny leader.

Dean has aspirations to go west to take up ranching, but feels guilt at the thought of dragging Alice from her beloved south. But Alice succumbs to tuberculosis, and the doctor prescribes a change of climate. To travel west. The children are besides themselves with excitement. Rodger, the eldest brother, declines to join them, having decided to become a church minister and stay with Alice's rigid brother.

The journey on part of the Oregon Trail brings out ten-year-old Jeannie's character. She feels as though she's coming home. She makes friends with their mountain man guide who tells her stories of the west, including stories of outlaws, and teaches her various frontier skills. She learns to shoot. Alice dies of her illness on route. Dean can't face further travel and splits from the main party to cross into Wyoming. Another family accompany them. They're attacked by Indians and Jeannie kills her first man - an indian who is about to shoot her Pa.

The family settle in Wolf Creek, Wyoming, on the Laramie Plains at the foot of the southern Rockies, and start ranching. Beloved Aunt Martha comes to live with the family as housekeeper and to look after them. Jeannie's development into a rebellious, strong cowgirl continues. She has developed a rip-roaring, irreverent sense of humour. She becomes charismatic to the extreme and grows into an androgynous beauty. She also learns the art of the fast draw and has become very effective at fighting the boys. She's become leader of her gang. She's developed a strong friendship with Victoria Allen, who sits behind her at school, but Vicky's father, Dirk Allen, hates Jeannie and disapproves of the friendship.

The years pass. Jeannie is given a dog, Tim, by her Pa, to help keep her out of trouble, but she becomes a thorn in the side of the town's people and parents have ordered her friends away from her side. She becomes an excellent cowgirl and has developed an extremely fast gun hand. She has proved her toughness, and people fear her. She is also in love with Vicky - and Vicky with her. Neither of them are aware of the other's feelings. Jeannie is terrified of what's happening to her, sexually. Just to compound matters, she's reached puberty and boys and girls are beginning to fancy her. She discovers her fancy for men with relief, and becomes a 'man-eater', but an irresistible one, almost to prove her sexuality. Eventually, Bob Delaney, one of Pa's cowboys, and Jeannie fall for one another.

People begin to form jealousies of her and her qualities, and enemies resent fancying her as well. At last, she and Vicky admit their love for one another, kiss and enjoy one another. There is some relief for both. Then Jeannie admits her feelings to her family and Bob can't cope with this. He ignores and turns away from her. Jeannie and Vicky are discovered being physical and Jeannie is beaten by Vicky's father. The people want her out of town and they try to hang her, but Vicky saves her from the noose. Then the men shoot her. The first time she's been shot. She survives but is badly wounded.

In 1886/87, terrible blizzards kill a huge proportion of the cattle and many of the ranches become bankrupt. This is the end of the free range. Dean makes the decision to restart with a herd of cheap cattle, turn to horse ranching as well and do a bit of farming. In the spring, Vicky is raped by a gang of hoodlums. The marshal and deputies lose them and Jeannie is disgusted with their efforts. The gang return and loot the bank when Jeannie and her brother Mike are in town - she has risked a visit, refusing to be imprisoned at home. A woman inside is killed. The masked outlaws leave the bank and Jeannie recognises them from Vicky's detailed description. Jeannie's dog, Tim, is with her and he takes exception to the outlaws and chases after one to the far end of the street, barking and making the horse rear. Mike, without thinking, races after Tim and picks him up. He looks up just as the outlaw's mask slips. He realises that Mike has identified him and shoots him. Mike collapses and the outlaw grabs Mike and shoves him onto the back of his horse, then gallops off. Jeannie charges into the street and makes ineffectual efforts at shooting them, but they're too far ahead. She stands in the middle of the street with her smoking gun down by her side, and the marshal's deputies ride either side of her, raising dust as they go. She yells at the outlaws to bring her brother back.

When she tells the marshal and deputies how useless they are for losing the outlaws again, they tell her to go for them if she's so clever. That does it!

Jeannie is practicing her fast draw on a glass bottle of whiskey she's drunk and chucked into the air, smashing it to bits. Her hated brother Rodger arrives at her side. After understanding that her intention is to ride after the outlaws and dispense with them, he threatens her, telling her that she's evil and must be dispensed with when she's not looking. He's psychotic, driven that way after the death of their mother, which was caused by Jeannie, so he states.

Jeannie has left a note on her dressing table for Pa to read, telling him she's had enough and she's going to find Mike and the outlaws. He's devastated but not surprised. She rides south and hunts down the outlaws, killing them after learning that they'd dropped Mike off because he was probably dead. Her old gang witness the shooting, having caught up with her and feeling guilty about deserting her in her hour of need. Now they intend to keep her out of trouble.


(If anyone has similar stories or experiences of such, I'd love to hear from you!) 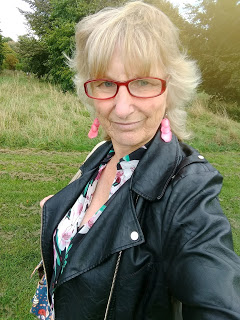