I've been waiting for the right moment to swop over to Blogger, but there's never a right time! So I thought: 'Sod it - post the next one.' So I did.
I'm rather pleased. Husband found this for me - he's good at this biz - as he did with Simplesite, which was fine for getting into this blogging lark, but very limited in flexibility. I could only post two images at a time, and postees, followers, what-have-you's could only respond to individual posts when I put them on Facebook or Twitter. And I can share posts more easily, I think.

Latest from Creating My Odyssey...

I've stated often in recent times that I've never felt this good. So, so true. Difficult to explain. All through my childhood I was very up and down, with a mother who often uttered 'What ARE we going to do with you?' which immediately makes you feel it's your fault. Then there was school , which I just about tolerated after all the teasing. I wasn't academic. Both older bros got into grammar school and I went to secondary, which really doesn't help one's already down beaten ego. I just managed art and English O Levels, scraped CSE maths, and RSA 1 and 2 typing (which has proved really useful!). But I did manage to learn to fly a small plane straight and level when I was seventeen, just one of the things I'd really wanted to do, and was teased about at school ('Why can't you learn to drive like everyone else?' A newspaper article was pinned up at school, and some idiot had drawn a moustache on me. Hah!). So it wasn't all bad.

I did an art foundation course. Excellent. Then I worked in various art studios in and around London. I was fine then, even managed to travel abroad (my lone trips – two years running – Greyhounding it around the States with my backpack, and visiting vari0us wild west towns, were brilliant.). While working to earn the dosh for these travels, my myriad jobs were quite varied, including a stint at Kew Gardens as a messenger on a bike. That was a good one!

I got married and it's the best thing that ever happened to me! We all know that by now. But I still had my ups and downsies. And having kids screwed up my hormones big time. My body wasn't made for having kids, but by gum and golly – am I glad we've got 'em! We're great friends and they're brilliant (that word...).

It took thirty years of more ups and downs and depressions and anxieties to get to that point, three years ago, when the medication crisis became the catalyst for where we are now. I didn't know what it felt like to feel fine. But I'm fine! I'm good! Three years later it's brilliant (I say that a LOT...) to just feel steady and fine. I'm almost wrenching at the bit to get on with Life with a capital L. Find it difficult to sleep cuz there's so much I wanna do.... :-D! 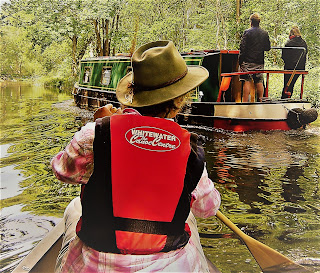