CREATING MY ODYSSEY: BATTLEGROUND - STEPHEN KING: Battleg round   The other night son Tom and I watched this short film of a Stephen King story, Battleground . Totally grippi...
Posted by Jo B Creative at 08:22 No comments:

The other night son Tom and I watched this short film of a Stephen King story, Battleground. Totally gripping and we really enjoyed it!


Renshaw, a professional hit man, assassinates a toy-maker. He returns home to find a package delivered to his apartment. The package contains a GI Joe Vietnam Footlocker sent by the toy-maker's mother. He opens the package and finds that the toy soldiers are alive with working miniature copies of weapons, jeeps and helicopters. To Renshaw's surprise, the tiny soldiers begin to attack him. At one point, the toy soldiers give Renshaw the chance to surrender on a small sheet of paper passed under a door, but Renshaw plots to destroy the soldiers with his own armoury.

I won't reveal the end just in case you fancy seeing it! 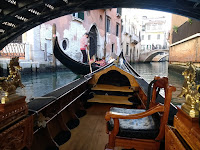 Venice - Paying Attention
This was my third trip to Venice.
This time I paid attention...
My first visit was as a fourteen-
year-old, one summer in the late
sixties.My parents had decided on
a trip...

The Extraordinary Tourist
Guest Post - Book Review:
The Great Pain Deception
If you've struggled with any kind of long term/chronic pain that numerous doctors visits have failed to fix, or even recognize that there is anything actually wrong with you (as in my own case), then this book may just be what you need to read. 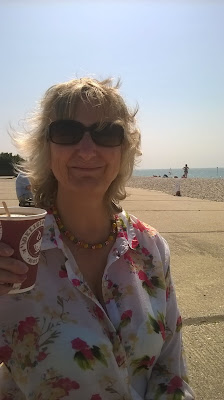 CREATING MY ODYSSEY: AN ABSOLUTELY FABULASO GOOD TIME!: Our thirteen-year-old twin granddaughters are absolutely fabulaso! We've just spent a few days on our narrow boat, Dotterel, with the...
Posted by Jo B Creative at 14:10 No comments:

We've just spent a few days on our narrow boat, Dotterel, with them, and we had a delightful time. The experience has also raised my mental health level up yet another notch.

So, there were two matters I had to deal with:

Double locks.  This particular cruise took us along the Oxford Canal from Napton on the Hill, Warwickshire, then turn right at Braunston, Northamptonshire, onto the Grand Union Canal. Then up a flight of six locks and through Braunston Tunnel, which is 1,867m long (thought you'd like to know that). Turn right at Norton Junction, continuing onto the Grand Union, down a flight of seven locks and finish at
Weedon, Northamptonshire. Then turn round and make the return trip.

The locks raise or lower boats up or down the contours of the landscape. The boat is driven into a lock. Gates are closed behind and in front of the boat, and water is either flooded into the lock or into the canal by sets of raised paddles, taking the boat to the same level as the onward going waterway. Hope some of that makes sense if you're unfamiliar with canal systems! Alternatively the link above should help.


These are double locks, which are large enough to take two boats. I prefer to drive while Husband works the lock. I love driving but I'd never been keen on 'socialising' with other lock operators, particularly when I was mentally unwell, although I had managed in years past, and enjoyed it. Pity, because I quite liked operating the lock paddles.

As the driver I felt I had to possibly engage with the other boater. Of course you can always completely ignore one another, but I was brought up to be polite and socialise. When I was unwell I grew to hate double locks, so we stuck to single locks and I felt happier because I didn't feel pressured into chatting with a stranger.

The second matter I had to deal with:

The twins. I was uncertain as to how they perceived me, considering that Husband usually has a case of verbal diarrhoea when talking to them, recounting funny stories from his past particularly. I grew jealous. I would feel myself shrinking into the background, and I hated that, feeling ordinary and dull. Looking    back now, why I did the shrink thing I have no idea.

We talked to them about it. Opened up. There're thirteen now and would understand completely. They did, and their responses were fabulous. A lot of hugging and talking happened and the girls told me in no uncertain terms that I was sweet and nuts! We all adore one another. I really opened up and Husband left me to it. Fabulaso indeed!

Back to double locks. Because my mood had bounced up, I found myself sharing locks with a sweet couple and their baby and I was fine. I was also delighted. I still prefer single locks but I feel no real trepidation over the notion of sharing a lock if I have to.

Success all round!
Just to finish off, here are some pictures of the trip, starting off from our base at Calcutt Marina, near  the  junction of the Oxford  and Grand Union Canals  in Warwickshire. 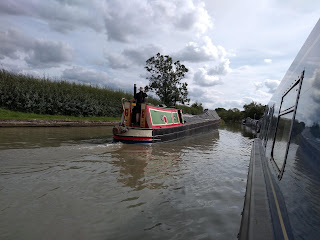 Our mooring at Calcutt 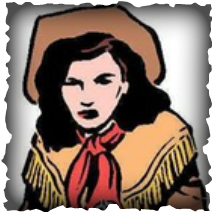 
As you'll know if you're following me, I've got a bit of a 'thaing'  for the wild and woolly west, and I've been runningKitty Le Roy's Wild Westmy wild west website, for many years now. Here I've charted my hobby - how and when it began, how I got involved in clubs and living history camps, the artefacts I've collected over the years, and, since my mental health recovery, the extending and makeover of Kitty Le Roy's cabin, and what my plans are for the future as regards this and steampunk, which is connected! 😄

So, have a perusal through my website and let me know what you think of it. Looking back on it, it desperately needs updating, and now that I'm showing it off on this here blog, it's time I did so.

Would love to hear your views on this or anything else!